Fresh horizons for co-operation with US 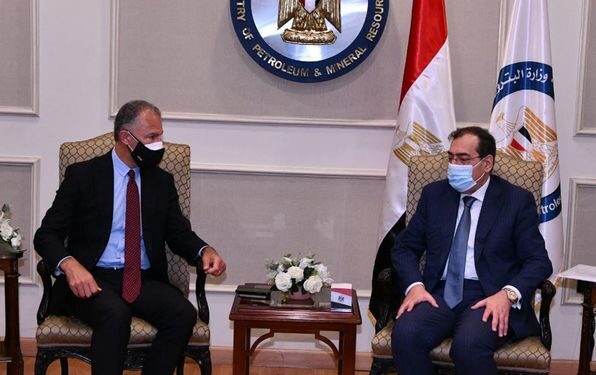 Minister of Petroleum and Mineral Resources Tarek al-Mulla during his meeting with Stuart Jones, President of Bechtel Corporation's Regions and Corporate Affairs on Tuesday.

Enhancing bilateral ties in petroleum and projects between Egypt and the USA topped the agenda of a high-level meeting on Tuesday.

Minister of Petroleum and Mineral Resources Tarek al-Mulla met with Stuart Jones, President of Bechtel Corporation’s Regions and Corporate Affairs, who is currently visiting Egypt, and Jonathan Cohen, the American Ambassador in Cairo.

During the meeting, the latest developments in the Red Sea Refining and Petrochemical Complex project in the Suez Canal Economic Zone were reviewed, and as also the action plan for implementing the project in the coming period, the ministry said in a statement.

With investments estimated at about $7 billion, the scheme comes within the framework of the National Ministry of Petroleum’s strategy to expand value-added projects in the petrochemical industry and increase the production capacity of petroleum and petrochemical products to contribute to the needs of the local market and export the surplus, Mulla said.

He stressed the need for coordinating actions to accelerate the implementation of the complex project, lauding the participation of giant international companies in the Advisory Committee for the Gas Industry at the Eastern Mediterranean Gas Forum, foremost among with is the Bechtel Corporation.

“The Bechtel and its peers’ participation in the Eastern Mediterranean Gas forum is a strong evidence of the importance of this committee and its role in the natural gas activity in the region, hence the opportunities it provided to define common goals and grant confidence to all companies wishing to work in the region,” Mulla said.

For his part, the American ambassador affirmed that the relations between Egypt and the US are unique and historic in various fields, expressing his country’s desire to enhance the investments of American companies in the field of oil, gas and petrochemicals in Egypt.

Bechtel Regional Relations president, for his part, affirmed that Egypt has succeeded in providing an attractive environment for investors in light of a stable and attractive climate for international companies and the increasing pioneering role of Egypt in the region.