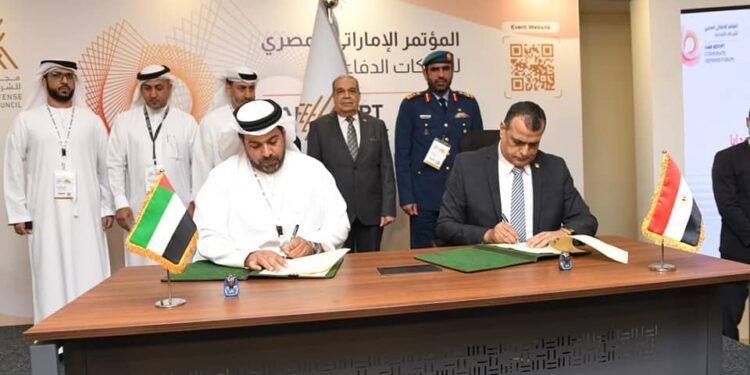 Military Production Minister of State Mohamed Ahmed Morsi witnessed on Wednesday the inking of a memorandum of understanding between the Egyptian National Organisation for Military Production and the UAE’s Emirates Defense Companies Council in the defense domain.

This came on the fringe of the Egyptian-UAE conference of defense companies that was held on the third day of the Egypt Defense Expo (EDEX 2021), which is currently held in Egypt under the patronage of President Abdel Fattah El Sisi.

Morsi welcomed the UAE delegation, hailing the outstanding UAE participation in the EDEX 2021 which is an important platform for standing on the latest international technology in military industries and defense systems.

He said the inking of the memo falls within the framework of the deeply-rooted Egyptian-UAE ties as well as the unprecedented development in the Egyptian and UAE national industries.

The memo is meant to promote co-operation in the defense industries field, exchange expertise and localise industries.

For his part, Matar Ali Al Rumaithi, Chairman of the Emirates Council for Defense Companies extolled this co-operation with the Egyptian Ministry of Military Production.

He stressed his country’s interest in enhancing strategic partnership in various domains.

He said the Egyptian-UAE ties are an example of Arab-Arab relations to be followed.